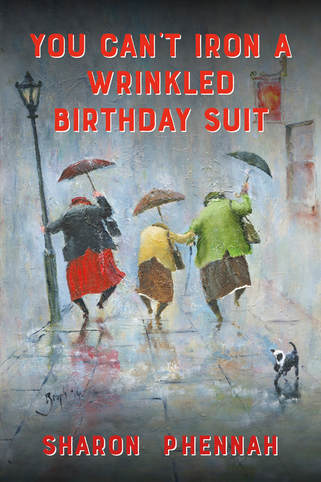 ​Zany families, eccentric friends, and ne-er-do-well neighbors inhabit the labyrinthine lives of three women friends as they grapple with real world events in one “Golden Year.”
An unwelcome visit from local law enforcement, a younger friend’s romantic chaos, and the death of a parent combine with daily mundanities−laundry, scones, senior sex−to create a walloping, raucous read.
Opinionated pets−critics and alter egos−offer a rich counterpoint to the human dramas affecting their lives.
Unfiltered and compelling, this entertaining saga provides readers of all ages with a new and positive view of growing older.

Read a SAMPLE on Overdrive

​AUDIOBOOK NOW AVAILABLE
Warning! Positive Images of Older Folks and Intelligent Pets Inside from time to time and if it fits anywhere, go for it.
Cheers, Sharon

For a week in November 2017, “You Can’t Iron A Wrinkled Birthday Suit” was ranked #80 out of 150 books on the Best Seller List in USA Today newspaper.

From Net Galley, Lynn Johnson
“This was absolutely an amazing read! The characters were fun, quirky, sassy, and ‘take no prisoners’ full of life. And guess what? Not a sparkly vampire, obnoxious twenty-something, or horrible ode to ’50 Shades’ in sight. Just real women of a ‘certain age’ attempting to muddle their way through aging and often times horrendous situations. ….. “Ms. Phennah allows her characters to be flawed, yet endearing. As someone on the cusp of 50, it was so much fun to learn that the best is yet to come, and that I won’t be forced to sit around talking about knitting all the time. “The unsung heroes of the book may very well be the charming fur babies who also have a voice in telling the story. The transitions between human narrative and animal narratives were handled in a logical order that did not detract from the story in any way. It allowed for further crucial points to be presented in the style of Rita Mae Brown. Not everyone will enjoy this particular facet, which is why it is necessary for potential readers to understand how the narrative voice works. However, it was completely seamless to this reviewer.”

A professional review for Net Galley, GoodReads, and four other locations, Gabby Hayze
“If we are not supposed to judge a book by its cover, is it allowable to make our reading choices based upon titles? Because that’s what prompted me to request this book written by Sharon Phennah from NetGalley.com, and why I was so pleased to be approved to read it in exchange for my honest review. Creative titles usually get my attention, and for the most part, it works for me. But in this case, it was like striking gold! In spite of the fact that I do not usually read books with or about animals (usually too contrived for my taste), in this book, the dogs were a very entertaining part of the story as well as a useful device for getting more information to the reader than the humans were collecting. By the time I finished the book, I was halfway convinced that there is a network of communicating dogs out there who may quite possibly be smarter and funnier than their owners.
“The humans, however, do dominate the story, and what a spunky, unique group of women they are. They not only support each other the unconditionally like each other enough to get involved in situations that could be against each one’s better judgement. For example, the beginning of the book concerns a caper wherein three of the women-Grace, Hazel, and Gus (Augusta)-have agreed to support the local Historical Preservation Authority by climbing to the roof of the McClellan building thereby preventing it from being demolished before the group can get a court ruling stopping demolition completely. The McClellan building was formerly the local 5 & 10 Cent store, and many of the town’s citizens believed it should be restored as a historical site. Those who disagree with this proposition are the ones who stand to make money on the land deal when the building is gone, and that includes what Lewis & Son Devoted Demolition Crew will earn for completing the job in one day. All the Historical Preservation Authority wants is to get a court ruling on their petition to save the building. The decision is expected by noon, which will be too late for the building since Lewis & Son shows up at the crack of dawn. So Grace and Gus are the first two to climb the ladder to the roof. Hazel, who is supposed to be keeping the ladder steady, is also throwing up in a Forsythia bush.
“First the fire department is called to remove the women from the premises, but they refuse to come to the site because they say if there’s an alarm given for a fire during that time, no one would be available to cover it. Next the police are brought it, but the women have arranged the situation in such a way that it’s nearly impossible to get them off the premises. The cliff hanger is whether the women can hold up long enough for the court decision to be useful to the cause—if in fact, the ruling is found in favor of the historical group.
“No one could have foreseen the repercussions this would have on the members of the little group of friends, particularly on Hazel’s significant other, Bruce Winston. What happens to him could very well ruin the rest of his life and intrude drastically on the future he and Hazel have envisioned for themselves.
“Hazel, Grace, Gus, and Marigold form the base of this group of friends, but each one has her own place in the novel along with her dog. A fifth hanger-on of the group is Irene, friend to Gus, who occasionally is called upon to help when Gus needs to include her. Not everyone takes to Irene because she runs a shop called Such Happenis Adult Toys. Together these women share adventures as well as personal tragedy. While the McClellan caper was called ‘Operation Wonder Woman,” the group are all women who deal with life’s challenges knowing someone will always have their backs should they need it. In other words they are average women with all the problems that go with aging. Phennah explores Alzheimer’s illnesses and other issues that have an effect on us all.
“And then there is that group of dogs. Their visits to Shear Charisma Grooming Shop are often funny, occasionally sad, and always entertaining. My favorite dog was Butterbean, Gus’s dog, and also the one who keeps most of the gossip straight. Butterbean is a Corgi, and if I ever were to own a dog (highly unlikely) Butterbean would be the one I’d want.
“I’d highly recommend YCIAWBS to mystery lover, and also those who’re looking for a good book with humor but also a lot of heart. That’s what I look for in reading material, and this book has 5 stars going for it. My thanks to NetGalley for allowing me to read and review this book.”

Net Galley, Sam Sanders
“When I get old, I hope to have friends as awesome as these. This is an absolutely feel good novel. Naturally, our intrepid characters, wattles and all, undergo all sorts of trials, but it’s the compassion and generosity they exhibit that endears the reader. There’s also the sense of humor one acquires when nearing the edge of death, only it’s not macabre but an open acceptance of an essential, inevitable part of the human experience.
“A dose of extra lovely is the friendship of their little critters who like to gossip about their owners every time they gather, like old biddies…”

From a local friend, Charlie Seaver and Pat, his wife
“Sharon—WELL DONE! You wrote a terrific book and we both enjoyed it very much. The story line, characters, descriptions were masterfully done and kept our interest all the way to the end. Had no problem at all identifying from start to finish with the women, situations, and even the dogs. Feel that it was a very insightful look at aging—funny, but not morbid….
“Our middle-aged daughter also read the book and found it interesting and hilarious. She hasn’t gotten the years under her belt that we do, but [she] still appreciated the book.”

From another friend, Gail Sklar
“This book left me laughing out loud! Ms. Phennah paints wonderful images with the metaphors she uses in her text. A lite and humorous novel [with] which many women, especially Baby Boomers, should definitely be able to identify. She covers many of the topics of aging, relationships with significant others or lack thereof, the loss of and aging parents, domestic violence and friendship in a very appealing way.”

Another friend, Jane Kistler Halweg
“Birthday Suit is a great romp through life; and reminds us that life doesn’t end when the wrinkles begin. I particularly enjoyed the sub story line of the animals’ conversations with were insightful and both touching and hilarious. The journey of the characters to live their lives authentically shines through in this great read.”

From a friend from childhood, Warren Potas
“Excellent read, refreshing depiction of pets and their cockamamie humans aging actively. Sharon Phennah’s “You Can’t Iron A Wrinkled Birthday Suit” is an engaging read, folksy in the best ways, touching on some serious social and personal issues, depicting a set of characters you get to know well enough that you’d REALLY like to befriend them, and incredibly adroit shifting the narrative’s focus back and forth between the humans and their keenly perceptive pets whose actions, activities, and characterizations are incisively and palpably depicted.”